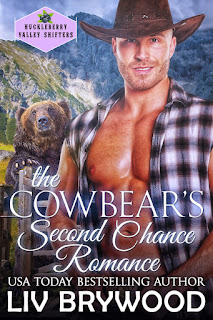 Cowboy bear shifter Jace Thompson is back in Huckleberry Valley to claim his mate. After surviving an explosion that put him in a wheelchair, he is rethinking his entire life. He’s made one mistake after another, but there’s only one he’s been longing to fix. Holly might refuse to give him a second chance, but he won’t stop until he has tried every naughty trick in the book to win her back. And he can be very, very persuasive.Holly hasn’t been able to get Jace out of her mind. It’s been years since they snuck around behind his parent’s back, but it feels like yesterday. Her heart never healed and it’s all Jace’s fault. She longs to surrender to his scorching hot embrace again, but it won’t be enough. If he really wants to prove his love for her, he’s going to have to tell the world their dirty little secret.This is the second book in the Huckleberry Valley Shifters series. This is a stand-alone book with NO CLIFFHANGERS and a HEA.

Posted by Liv Brywood at 9:21 AM No comments: