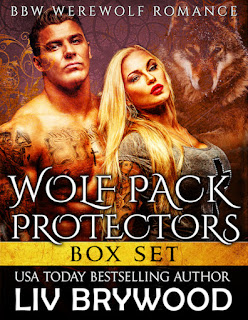 When a tall, dark and dangerously sexy Alpha werewolf rescues Diana from a vicious attack, she doesn't know who to fear more - her attacker or the wolf. She's heard whispered legends of a powerful werewolf but never believed such a creature could exist. Captured by the wolf, she's taken to his den, and to his bed.

Forced to take refuge in an abandoned cabin in the middle of the woods, Brandy thinks she's finally escaped her stalker. But she quickly realizes, she's not alone. An unimaginably sexy, and very naked, man appears in the middle of the night to offer her protection. She's captivated by his stormy eyes, until she learns his dark secret. She knows she could never tame him, but when he makes the ultimate sacrifice for her, she knows she can't live without him. The more he tries to resist her, the more she wants him and for once in her life, she intends to get what she wants.

Gwen hasn't left the Silver Creek Pack's den since a devastating assault that scarred her body and still tortures her soul. But when Nosh, the alpha of the Dark Moon pack, is injured in a suspicious accident, she's forced to travel to his den. The healer-in-training draws on all her skills and saves the alpha, but soon he narrowly escapes another "accident." Someone in Nosh's pack is hell-bent on murdering him and everyone he cares about, and now Gwen has been targeted by a killer.

Wolf Pack Protectors is a complete three book paranormal romance series. This is a stand-alone book series with no cliffhangers. Love scenes are fully realized and at times include explicit language.

Posted by Liv Brywood at 2:54 PM No comments: