Rescued by the Alpha, Book 2 is now available! 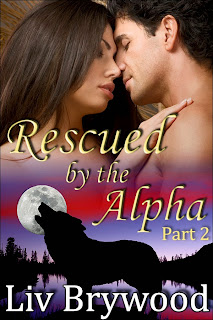 As dark passion flares between Diana and Ryker, the humans prepare to wage war against the wolves.

Diana’s heart belongs to Ryker, the tall, dark and dangerously sexy alpha werewolf, but the other wolves want her gone. Even though she struggles to compete with a ghost from his past, she refuses to leave his side. His haunted eyes tear at her soul, but she knows she can heal him if he’ll let her.

Ryker knows their ill-fated romance can’t survive the scrutiny of the pack, but he won’t let her go until Zane is defeated. Terrified of failing her, Ryker knows the pack can’t defeat Zane’s militia without help. He travels to meet the alphas of two nearby packs and inadvertently stirs up a feud from the past. Ready to face his greatest enemy, he makes a fatal miscalculation and a member of his pack is murdered.

This 15,500 word episode is the second installment in the three book paranormal romance series, Rescued by the Alpha. Love scenes are fully realized and at times include explicit language. Intended for readers 18+.

If you haven’t read it yet, Part 1 is available at: