The first draft for Rescued by the Alpha, Book 2 is done! I'm working with my developmental editor on it next week. It will be ready before the promised date of June 15th. More details to come once I'm done with the initial round of edits.

As soon as the cover is ready, I'll be posting it on my blog and on my Facebook page. Be sure to friend me to get up to the minute release dates and details.
Posted by Liv Brywood at 1:52 AM No comments:

Rescued by the Alpha, Book 1 is Live! 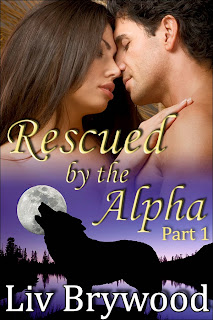 When a tall, dark and dangerously sexy Alpha werewolf rescues Diana from a vicious attack, she doesn't know who to fear more - her attacker or the wolf. She's heard whispered legends of a powerful werewolf but never believed such a creature could exist. Captured by the wolf, she's taken to his den, and to his bed.

Five years ago, a tragedy shattered Ryker's heart. As Alpha of the Silver Creek Pack, his duty to protect the pack compelled him to institute a new law - never bring a human to the den. But after saving Diana, he can't abandon the curvaceous woman alone in the woods, so he violates the law. He'll take her back to the town of Full Moon Bay as soon as night falls. But as the hours dwindle and his desire for her grows, a dark force builds a powerful weapon to use against the wolves.

This 15,000 word episode is the first installment in the three book paranormal romance series, Rescued by the Alpha. Love scenes are fully realized and at times include explicit language. Intended for readers 18+.


Stryde, the reclusive alpha male of the Dark Moon Pack, doesn’t believe in love. Fate claimed the life of his mate and he refuses to spend more than a few nights with any woman. But when he meets Brandy, Sheriff Watkin’s niece, she turns his world inside out.


Brandy’s stuck living with her uncle while her father, the useless town drunk, does his time in prison. Her uncle makes her swear not to go into the woods at night, which is as good as a dare as far as she’s concerned. While searching for the werewolves’ den, she’s caught in a snowstorm and must ride out the storm in very close quarters with Stryde. The more he tries to resist her, the more she wants him and for once in her life, she intends to get what she wants.


To be notified when this book is released, please sign up by clicking here!
Posted by Liv Brywood at 2:02 PM No comments: